Remarks by Secretary of State Antony J. Blinken at a UN Security Council Open Debate on Conflict and Food Security

Dr. Alexander V. Los is an Einstein-level aviation and aeronautics design engineer that NASA would love to have; we cross-pollinate our ideas, fears and solutions to enjoy the joys and despair of an applied multiplier. Accordingly, the “unknown, unknowns” sometimes pop out and become “knowns,” to great surprise and satisfaction of the late Secretary of Defense Donald Rumsfeld. He also sees geopolitics differently, aided by history, geography and equity-based patriotism. Knowing that, I have taken the liberty of editing his stream of thought to better inform by adding a headline, captions, nuance changes, and approved the same for publication. One final note, consistent with above: his thoughts about India and China I have left as he, a Ukrainian, not I, as an American, see it. I did add, however, my clear observation that Russia’s War in Ukraine is a proxy war between President Putin and us, and hence, the caption and sentence.

“I think, therefore I am”
René Descartes

I invite dear readers to familiarize with the recent Policy Paper of Council on Geostrategy: “‘Global Britain’ and the Black Sea region” (https://www.geostrategy.org.uk/research/global-britain-and-the-black-sea-region/). This Policy Paper, despite its importance to the United Kingdom, and obviously the USA, from Ukraine’s point of view, is a call to rise above the problem of today and look at the challenges in Ukraine itself, and abroad, in a global long-term context.

This document is even more important against the background of the event “Global Britain” and the Black Sea region announced on April 25, 2022, with the participation of representatives of the Government of Ukraine. I sincerely hope that the brave representatives of the government of Ukraine will continue to actively promote the state interests of Ukraine at the global level, on all international platforms.

Russia on February 24, 2022 transitioned to a full-scale anti-human war in Ukraine, with a clear warning by the Russian political leadership, namely: “to put an end to the unabashed drive towards full domination by the US and its Western subjects on the world stage” (https://www.businessinsider.com/russian-foreign-minister-says-ukraine-war-meant-stop-us-domination-2022-4 ). This Warning is the lumpen-proletarian paradigm of “fighters for the world revolution” of the military-communist dictatorship, with the constant “creation” of new and new “enemies,” and calls to their citizens to “protect” something. That is, to act in the “post factum” paradigm. Putin’s Russia, a PRC partner-proxy, is a worthy successor to the Soviet rhetoric and an  example of a model of external manifestation. Accordingly, Ukraine is obliged to proactively protect and promote its military-political and economic-industrial interests, including the future joint extraterrestrial space exploration missions it is uniquely capable of and for.

As a Ukrainian, I am offended.

The Policy Paper is a benchmark for Ukraine of proactive behavior and formation of its desired future state, despite the low predictability of the impact of most external factors. And immediately, anticipating the allegations that the destroyed poor Ukraine is not Britain, is in a state of war and on the brink of extinction, I will answer that: at first, Ukraine is one of the most influential countries in intellectual, energy (especially, nuclear materials and nuclear energy) and agricultural spheres; and secondly, it is Ukraine’s inventions and developments that has aided in the success of all known developed countries. And the sooner Ukraine begins to seek its just place in the new world order of division of labor and wealth, the better results the people of Ukraine and the state will achieve across all horizons of development.

As has been repeated many times, but it has become no less important, and the document emphasizes once again, geographically Ukraine is on the central axis between the Euro-Atlantic and Indo-Pacific regions. 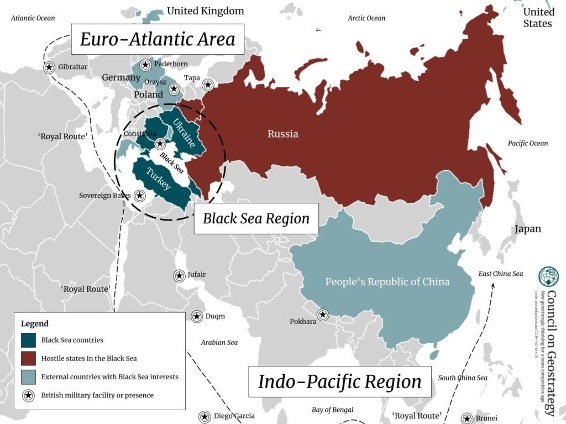 Both regions are, first of all, influential financial, economic and technological poles, which is the source of the threatening military-political component in the already open confrontation between “PRC and Russia” against “the West” led by the United States. At the same time, in the north of this axis there is a “bridge” to the Arctic, which has already been claimed by PRC, declaring itself an “Arctic state,” and in the south – Africa – where there has long been confrontation, often militarily, for natural resources, especially rare ones. And, as expected, PRC has joined the struggle for dominance in Africa.

Lithium is the new “gold.”

One of PRC’s areas of interest in Africa are the deposits of rare earth metals, such as the new “gold” in clean energy – lithium. An interesting “coincidence” is the fact that according to UN estimates, Ukraine was the main supplier of food to African countries and, therefore, the UN is already warning of impending famine and downturn in the world economy. In addition, new lithium deposits have recently been explored in the south of Ukraine, in the areas where fierce fighting is taking place at the time of this publication. Further conclusions are obvious: PRC wants to become a beneficiary of Russia’s occupation-war in Ukraine, despite Russia’s “bloody hands,” as fruits of a successful “No Limits” partnership.

Brilliant Ukrainians, creators of AN-225 “Mriya” are to become Hillbillies.

The Ukrainian people and Ukraine are once again paying with their blood and lives for the security and comfort of other nations, so the Ukrainian state is obliged to declare on every global platform about the Ukraine’s future major role in the global high-tech economy, with the highest possible contribution of intellectual labor and proven “added value.” This requirement is based on the observation that Ukraine was forced both externally and, eventually, internally, to focus on it’s agriculture, with a steady decline of growth in our high-tech sector.  This is reminiscent of the situation with Germany after WWII, when its transformation into a purely agrarian country was actively considered. Against this background, the consent of Ukraine, which has never been an aggressor in-war and voluntarily freed the world from the threat of the third largest nuclear arms, to be degraded from the nation of spaceflight theorists, who fought XXth century’s Nazis (https://en.wikipedia.org/wiki/Yuri_Kondratyuk), and creators of the AN-225 “Mriya” to backward farmers in an agrarian corrupt declining economy, was, and is, criminal and unworthy of our people.

Returning to the proposed Policy Paper of the Council on Geostrategy, it should be noted that Ukraine is still considered as an object for which the program-target principles are created. I express my sincere gratitude to Dr. Alexander Lanoszka and James Rogers for respecting Ukraine’s interests in the Black Sea region, considering the interests of Britain and NATO, and recalling Britain’s commitments to Ukraine under the Budapest Memorandum.

The lack of strict punishment of Russia, by the Western coalition for violating the Budapest Memorandum in 2014, has led to impunity escalated by PRC and Russia in the Indo-Pacific region – the crisis around the Republic of China (Taiwan) –  and now there are signs of the formation by PRC and Russia of the Third Front in the Balkans by Serbia, which is already purchasing high-tech weapons systems from PRC (e.g., anti-aircraft missile systems HQ22) and Russia.

These signs only underscore the fact that the War between PRC-led Russia against the United States in Ukraine is of global significance, not merely regional, which obliges Ukraine to demand the maximum share in the world’s distribution of labor and wealth for allowing our nation’s people and land to become a bloody battlefield for Great Powers fighting their proxy war, and shifting global security architecture by force: reverse Cuban Missile Crisis and a pregnant checkmate. The seemingly “sleeping giant,” India, which may well occupy a prominent place not only in the Indo-Pacific region, but also in the world, still appears to be in a “waiting” posture. With this in mind, the Council on Geostrategy is already considering extending the AUKUS format to JIAUKUS – Japan, India, Australia, the UK, the US (https://www.geostrategy.org.uk/britains-world/the-case-for-jaukus/ ). Against this background, it is natural for Ukraine to join such an intercontinental security format, and not to remain stuck in local regional associations, diminishing both our losses in the proxy war and pain’s magnified value, such as in the Intermarium or the British-Polish-Ukrainian Triumvirate.

The America Times was re-born on September 11, 2021, with the goal to better inform our
leaders and policymakers of nuances, beyond conventional wisdom, to successfully address
present day “Gordion Knots,” sometimes as Alexander the Great did by cutting it and other times by tediously unraveling it. During March 2022, diplomacy is at a fever pitch in Washington D.C., Moscow, Kyiv, Vienna, Geneva, Brussels, and every major capital of the world, as Mr. Putin's Russian troops invaded Ukraine on February 24, 2022 and unleashed their hell on people, infrastructure, cities and sovereignty, while Ukraine's president Volodymyr Zelensky rose to unexpected courage and bravery - declining our offer to evacuate him, by saying: "I don't need a ride. I need ammunition." Everyday Ukranians have answered the call to protect their land from Russia's yet-another attack to subjugate them at best, or exterminate them at worst. The great Russian military has run into the iron will of Ukrainians, a mistake that we expect will deny Russia peaceful sleep for at least two generations and unhappily revibrate in history.

We are honored and privileged to have Hon. Dr. Alexander V. Los – an aviation design global super-star, former president of Ukraine-owned Antonov Company, who can be the "wings" beneath our and NATO's firepower – join the Honorary Board of Advisors & Columnists of The America Times in recognition of his excellence and record of contributions. Dr. Los's life experiences and aviation design superstar, helps him to better decipher what is needed to deter a war, and if one exists, to overcome it without global annihilation. His knowledge and continuing work, as Chairman of ACE Air Combat Evolution Ltd, are the underbelly of war itself which is unleashed when Leaders are not appeasing anymore.  He is welcome to appear from time to time on the pages of The America Times. Reading his current contribution, we are certain, will serve to form a more perfect nation, and world, and thereby enhance both regional and global peace and security; maybe, even in dealing properly with Mr. Putin. A translated interview of Dr. Los by Defense Express was published by The America Times on October 29, 2021:  https://www.america-times.com/interview-with-former-antonov-head-us-ukraine-must-pursue-more-fundamental-forms-of-cooperation/
Benjamin Franklin famously said in 1787: “It’s a republic madam, if you can keep it.”
Dr. Alexander V. Los' contributions in The America Times will help us keep our Republic.
Please enjoy his accomplishments, along with a few pictures – including, with NATO SG Jens Stoltenberg.
Ranju Batra & Ravi Batra
Publishers
Related entries
Share
Facebook
Twitter
Pinterest
WhatsApp
Previous articleU.S.-EU: Consultations between United States Deputy Secretary Wendy Sherman and EEAS Secretary General Stefano Sannino
Next articleAdopted: UNGA Draft Veto Initiative Resolution by Liechtenstein’s Amb. Christian Wenaweser

Remarks by Secretary of State Antony J. Blinken at a UN Security Council Open Debate on Conflict and Food Security