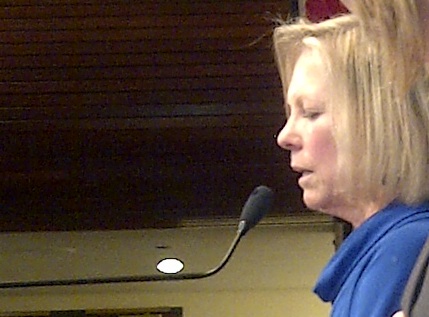 Washington, DC – The image of today’s India has moved beyond the IT yuppies and earlier snake charmers, elephants, and begging children to a vociferous nation which is raising its collective voice to protest against social injustices and to insist on equal rights and protection for women.

Addressing a select audience at the National Press Club in Washington, DC on March 20, the United Nations Foundation President and Chief Executive Kathy Calvin said, “I have been really impressed by what’s been going on in India, for example, and the way that that country’s citizens are standing up and taking on this issue of what’s going on with women and girls.”

India has been up in arms after the December 16 rape of the 23-year-old physiotherapy intern whose brutal gang-rape in Delhi on a moving bus inspired widespread protests. The young woman known to India and the world as Nirbhaya (Fearless), who later died of her injuries, brought millions out onto the streets of India.

“Watching a country like that stand up and say, ‘We want to have different sets of values. We want to see our country change,’ is the other area where I think, frankly, we need to keep our eye, not only on the problems, but on those kinds of really exciting transitions,” said Calvin.

Calvin spoke of the impact on economic development and the elimination of poverty, pointing out that providing girls with access to education, family planning and technology improves economies as a whole.

“Change always starts with a girl,” Calvin said. “We call this the ‘girl effect.’ It’s not rhetoric; it’s a fact.” Calvin, who was named one of Newsweek’s 150 Women Who Rocked the World, said “girl power” is among the “most potent weapons” available to raise living standards.

Citing a World Bank paper which predicted that closing the gender gap so girls are economically as viable as boys would increase India’s annual GDP growth by 4.4 percent, Calvin said, “All of this promotes more productive and stable countries, more markets for our companies – and it enhances global prosperity and security, which benefits us all.”

Calvin lamented the fact that the world was not giving girls the chance to change the world, saying, “The problem is that in many parts of the world, we’re not only ignoring their potential, we’re actively burying it under bricks of discrimination, exclusion and injustice. Right now, millions of adolescent girls endure quiet crises that rarely make the news or see the inside of a courtroom.”

The prevalence of child marriage and the devaluing of women and girls impede women’s professional and economic success, hurting families and communities, said Calvin.

“Girls between 10 and 14 are particularly vulnerable. They’re often forced to marry young, drop out of school, and carry the burden of household chores. Deprived of education, skills and opportunities, they don’t get to earn a living. They are often physically and sexually abused,” said Calvin, adding, “They’re often denied the right and tools to plan their own families.”

However, programs which have been generating awareness have resulted in “the start of a global revolution to recognize the rights of girls, and to realize their potential,” noted Calvin.

“It’s evident every time a man or a woman or a boy or a girl takes to the streets to protest violence against girls and women, as we witnessed after the brutal gang rapes in India and South Africa,” said the UN Foundation chief.

She also promoted girls’ use of cell phones and the Internet as a way for them to keep up with technological advances and take advantage of creative opportunities in financial markets.

Instituting quotas for women in government and professional positions and removing laws and policies that discriminate against them are also important, Calvin said.

Calvin concluded on a positive note, praising the US administration for showing “tremendous and awesome leadership.” “Earlier this month, President (Barack) Obama signed into law the reauthorization of the Violence Against Women Act, which includes new provisions to make ending child marriage in developing countries an official foreign policy priority of the US government,” Calvin said.