Russia Puts the Freeze on EU

The recent terrorist activities by the Tigrayan People’s Liberation Front (TPLF) in the Amhara and Afar regions of Ethiopia, including killing, beating and the destruction of property of innocent civilians must be condemned by all peace-loving people in the US and the international community.

The Ethiopian government must explain why security forces failed to protect innocent civilians in the Amhara region. The Ethiopian parliament must investigate these barbaric acts and report their findings to the Ethiopian public to ensure the most basic rights to its citizens: protection from targeted violence, killings and rapes, as well as freedom from arbitrary arrest. Steps must be taken so the TPLF is not permitted to continue committing terrorist and criminal acts.

TPLF forces in northern Ethiopia have been accused of numerous atrocities, including the murder of more than 100 civilians in late August in a village six miles from the town of Dabat.
The terrorist TPLF is supported by outside forces, including Egypt and Sudan.

The London Telegraph reported the atrocities committed by the TPLF terrorist group against Amhara and Afar regions against civilians in Ethiopia. Using satellite images and interviews, they found that the TPLF systematically destroyed farming communities and indiscriminately shelled civilian areas in a series of horrific attacks.

USAID Ethiopia director, Sean Jones, has confirmed TPLF looted USAID warehouses, stealing food that was intended to save lives. TPLF is using food as a weapon to attack innocent civilians.

There are signs that the combination of conflict and drought could create famine conditions in the Amhara and Afar regions of Ethiopia. In the 1980s, some of the world’s most famous musicians rallied the world to help end a famine in Ethiopia. Today the world needs to understand clearly what is happening and come together again, setting aside political differences. What can be done must be done.

On a positive note, Ethiopia’s Minister of Water, Irrigation and Energy, Dr. Sileshi Bekele recently reported that the necessary preparations are underway to enable the two turbines of the Grand Ethiopian Renaissance Dam (GERD) to generate electricity in the first months of the coming Ethiopian new year. That is good news for all Ethiopians.

Ethiopia believes issues about ensuring equitable access to the Blue Nile’s waters can and should be resolved through tripartite talks with Egypt and Sudan.

An understanding of some basic facts are necessary to comprehend the situation. Although 85% of the water in the Nile originates in Ethiopia, in the Blue Nile, the Ethiopian people derive very little benefit from the river.

The GERD will meet Ethiopia’s need for power. Today, 83% of Ethiopians lack access to electricity; 94% rely on wood for daily cooking and heating. This is an unacceptable situation, especially since Ethiopia possesses abundant water resources and hydropower potential, second only to the Democratic Republic of Congo in all of Africa. Only 3% of this potential has been developed. The GERD is also essential to improving Ethiopia’s food security. Currently, less than 5% of irrigable land in the Blue Nile basin has been developed for food production.

Ethiopia is at a critical crossroads with a large and increasing population, a depressed national economy, insufficient agricultural production, and a low number of developed energy sources. The upper Blue Nile basin harbors considerable untapped potential for irrigation and hydropower development and expansion. 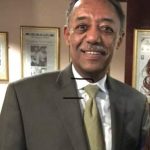 Russia Puts the Freeze on EU