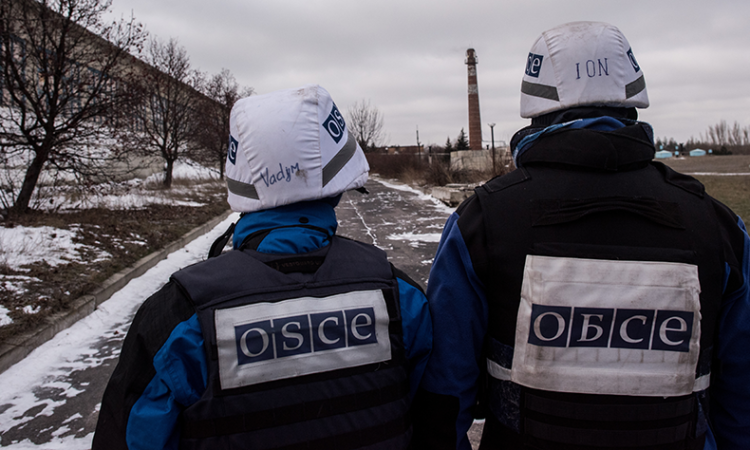 Four members of the Special Monitoring Mission (SMM) are detained in eastern Ukraine, the Organization for Security and Cooperation in Europe said on 23 April.

“The detention of SMM national mission members in Donetsk and Luhansk is unacceptable, and we call for their immediate release,” said Rau. “They were taken for engaging in administrative activities that fall within their official functions as OSCE staff. They have been held without charge for a period of time now and the OSCE and their families have not been sufficiently informed of the situation.”

OSCE evacuated approximately 500 international mission members from Ukraine, was reported on 1 April. While all mandate activities ceased on 1 April, the SMM continues to carry out minimum necessary administrative tasks.

No consensus on the extension of the SMM mandate

On 31 March 2022, during discussions at the OSCE Permanent Council, no consensus was reached on the extension of the mandate of the OSCE Special Monitoring Mission to Ukraine, owing to the position expressed by the Russian Federation. Therefore, as of 1 April, no mandated activities have taken place and the SMM has moved to an administrative mode. This involves carrying out a limited number of essential administrative functions, including those focused on efforts to ensure the safety and security of its mission members, assets, and premises, throughout Ukraine, including in areas not under the control of the Government.

While the OSCE Chairmanship continues to engage with participating States, the SMM is discharging its obligations in the management of its human, financial and material resources pending a conclusion on the future of the Mission.

UK statement to the OSCE

UK Deputy Ambassador Deirdre Brown said in her speech delivered on 22 April that Russia’s war in Ukraine has caused devastation while Russia continues to deny its responsibility for thousands of deaths.

“Thousands of civilians have been killed. Millions have been left in need of humanitarian assistance. 25% of Ukrainians have been forced to flee their homes. Hospitals, schools, and other critical infrastructure have been bombed, targeting the most vulnerable,” the Dep. Ambassador said.

The new Russian offensive in eastern Ukraine will cause more suffering to civilians. Russia’s efforts to capture the city have already come at horrifying costs to its residents, stressed the UK diplomat.

“In the face of this enormous suffering, the Russian Government has continued to perpetuate their blatant lies and to deny responsibility for these deaths. They repeatedly said they would not target civilian infrastructure, but they have remorselessly attacked residential areas, schools and hospitals. They said they would not harm civilians. Yet we are seeing strong evidence that war crimes against the civilian population may have been committed, including as documented in the OSCE Moscow Mechanism report which we discussed in this Council last week,” continued Brown.

The Russian government refused to extend the mandate of the Special Monitoring Mission.

“Not content with spreading disinformation, the Russian government has also attempted to tamper with the efforts of those who report the truth, including through their refusal to extend the mandate of the Special Monitoring Mission. And now we have received alarming reports that Russia’s proxies in Donbas are threatening Mission staff, equipment and premises and that Russian forces have taken SMM staff members captive. We condemn these threats to this Mission and its dedicated personnel in the strongest possible terms. We call for the release of SMM staff members, as well as all Ukrainians detained by Russia,” added Deirdre Brown.

OSCE calls for the immediate release of detained OSCE officials

The efforts of the OSCE Chairman-in-Office and OSCE Secretary General continue with maximum caution. Out of concern for the safety of the staff, the OSCE is not able to release any additional information about the situation at this moment.

“I condemn the deplorable acts of intimidation, harassment, and hostile public rhetoric against the SMM and mission staff in non-government controlled areas of Donetsk and Luhansk. All of our national mission members remain OSCE officials and should be afforded functional immunity, including during this period when the mandate has lapsed,” OSCE Secretary General said. “Their work has been crucial in many areas, including maintaining contacts with relevant stakeholders and civil society, and facilitating localized ceasefires for vital infrastructure repair, directly helping to alleviate human suffering.”