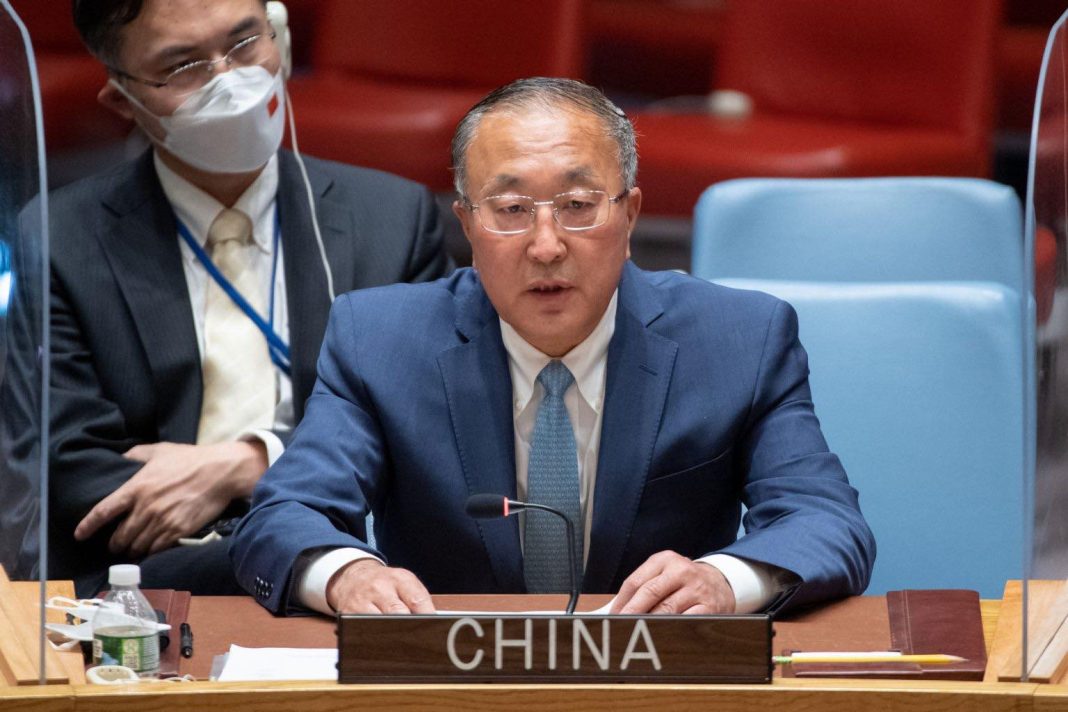 I thank the Japanese Presidency for the initiative to hold today’s meeting. I also thank Secretary-General Guterres, ICJ President Donoghue, and Professor Akande for their briefings.

Our world is in the grip of interlocking changes and turbulence. While old issues and tensions remain, new challenges emerge thick and fast, with a mounting governance deficit. All these have made it all the more relevant to bolster the rule of law at the international level, which is a shared responsibility of all countries. I would like to share our views as follows.

There is a phrase that we often hear these days, that is, the rules-based international order. It is an ambiguous formulation that is not found in the UN Charter, not in any of the leaders’ declarations adopted by the UN, and not in any of the General Assembly or Security Council resolutions.

We want to ask: What kind of rules is the so-called rules-based international order based upon? Who creates these rules? And how are these rules related to the international order? We have yet to hear a definitive, unambiguous answer to these questions. What we have seen instead in reality is how the so-called rules-based approach pursued by some countries has plunged the world into immense trouble and chaos.

If the rules referred to in their formulation are the universally recognized international law and the purposes and principles of the UN Charter, then why not be clear and upfront about it? If there are, surprise surprise, other rules than universally recognized international law that can serve as the basis of international order, may I ask, what are these rules? Could you list them one by one? Why do those countries, while chanting the rules-based mantra at every opportunity, be evasive on the specifics of these rules?

We therefore have to suspect that the true intention of a scant few countries touting a rules-based international order is to create an alternative to the existing system of international law, to impose their own standards and will on others by putting their own narrow interests at the center of the universe, and to open the back door to double standards and exceptionalism. The statement made by the US Representative earlier today further convinces us that our suspicion is fully justified. If we let this dangerous trend go on unchecked, our world will regress into the age when the law of the jungle and power politics ruled the day. All peace-loving peoples of the world should be wary of this. We hope this meeting provides a pivotal opportunity for all countries to affirm unequivocally that there is only one system in the world, that is the international system with the UN at its core; there is only one order, that is the international order based on international law; and there is only one set of rules, that is the basic norms governing international relations anchored in the purposes and principles of the UN Charter.

As a permanent member of the Security Council and the largest developing country, China will continue to stand by and behind true multilateralism, safeguard the purposes and principles of the UN Charter, take the lead in implementing the rule of law at the international level, uphold international fairness and justice, advocate common values of humanity, and make unremitting efforts to advance global governance in a more just and reasonable direction, build a shared future for all countries, maintain common security, and promote common development.

Related entries
Share
Facebook
Twitter
Pinterest
WhatsApp
Previous articleStatement on behalf of the European Union and its Member States by H.E. Ambassador Olof Skoog, Head of the Delegation of the European Union to the United Nations at the United Nations Security Council the Promotion and Strengthening of the Rule of Law in the Maintenance of International Peace and Security
Next articleRemarks by Ambassador Linda Thomas-Greenfield, U.S. Representative to the United Nations, at a UN Security Council Open Debate on the Rule of Law